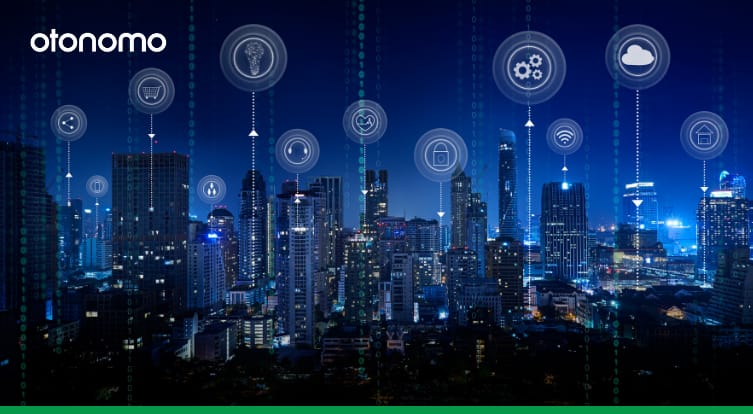 The global smart city market size is exploding. It is expected to grow from an estimated $410.8B in 2020 to over $820B in 2025. Smart cities use big data to make decisions, and the automotive IoT revolution is enabling the collection and communication of such data. Transportation is a major factor affecting urban areas, and a key use case for smart cities. Intelligent transportation systems, often using a traffic management center to monitor and coordinate a large network of sensors, are finding innovative ways to improve traffic congestion and urban mobility.

Mobility is a far reaching concept for cities, encompassing everything from traffic management to public transportation to infrastructure systems. IoT, and specifically the automotive IoT, is helping cities to gather and analyze data at an unprecedented rate, and smart cities are utilizing both real-time and historic traffic data to make critical decisions. While many of the cities pioneering intelligent transportation systems currently rely on sensors embedded in infrastructure, we see that these costly methods are being replaced or supplemented with connected car data to take advantage of embedded modems and V2X technologies.

Smart cities are popping up around the globe, often with different focuses and methodologies. The following cities are standout municipalities that are leading the way in smart mobility and transportation.

Singapore became the first country to establish a smart nation minister in 2014, but the city-state was pioneering smart traffic management for more than a decade before. As early as 1998, Singapore introduced the Electronic Road Pricing scheme to manage traffic congestion. Further investment in intelligent traffic management has progressed in recent years, with a $12B budget for transportation development in 2018. This substantial expense is in large part due to connected infrastructure equipped with sensors for traffic management and preventative maintenance. However, the city is also focusing on utilizing connected vehicles, with plans to launch automated busses as early as 2022. The city has been named by KPMG as first in readiness for automated vehicles. Singapore’s data-rich intelligent transportation system, with its ability to deliver real-time traffic alerts to the public, has made the city one of the least congested in the world.

New York City is known for its exceptional public transportation, and the city is continuing to innovate by developing an intelligent transportation system, landing it the top spot for mobility on IESE’s city in motion list this year. New York City has already been investing in connected infrastructure and adaptive signals, installing cameras and sensors at over 10,000 city intersections. The municipality is also innovating using connected cars, deploying a Connected Vehicle Pilot Program to collect and analyze data from connected vehicles for a variety of technologies and applications. The program will use connected vehicle hardware and software to implement V2X initiatives to improve safety and traffic management in real time.

London is taking its infrastructure into the future by leading the way in 5G infrastructure. The Smart Mobility Living Lab in London (SMLL) is deploying the world’s most advanced urban testbed to provide 5G connectivity for connected and autonomous vehicles. The city will test V2I and V2V capabilities in a real world environment, taking advantage of high-speed 5G. O2, the mobile operator enabling SMLL reported that the value of 5G for road management systems could reduce time for motorists stuck in traffic by 10 percent, save the economy £880 million a year, and reduce CO2 emissions by 370,000 metric tons per year. The city has also announced the launch of Sitraffic Fusion, a program designed to manage traffic through data obtained from connected vehicles. This program will be a key feature in London’s Real Time Optimiser system, which has previously been managing roads through data from embedded in roads, cameras, and connected infrastructure.

Paris is committed to public transportation and pedestrian transport. While the city continues to develop infrastructure for non-motorized transport, it recognizes that vehicles are a necessity. In an effort to become a green city, Paris is moving to replace its entire bus fleet with electric vehicles. Paris is also focusing on road safety and traffic management, decreasing traffic fatalities by 40% since 2010. It is advancing its already established intelligent transportation system, and will invest €100M to adapt infrastructure to facilitate mass deployment of connected and autonomous vehicles.

China has a centralized approach to smart cities, with over 800 smart city programs in the country. It is estimated that the country’s smart city solutions market is $1.1T. Beijing is a standout example, becoming the first chinese city to authorize AV testing on public roads in 2017. China’s AV market is estimated to be the largest in the world, and the country recently used automated vehicles during the Corona pandemic to minimize contagion when delivering vital supplies. Beijing has employed this and other connected car technologies, along with embedded sensors and cameras, to monitor traffic and road conditions. Big data analysis and AI are used to power intelligent transportation management systems to keep the city moving.

Berlin adapted a smart city plan in 2015, and has continued to progress in the years since. It’s latest mobility project centers around in-ground sensors at roadway intersections. This vehicle detection system will use wireless technology to deliver traffic data for intelligent traffic management. The city is also focusing on expanding the presence of electric vehicles, and has launched BeMobility, a program with a projected budget of over €9B with the goal of deploying e-carsharing and EV fleets, as well as increasing the number of charging stations in the city.

Seoul – First City to Use 5G for Public Transport

Seoul adapted smart mobility as early as 2003, increasing mass transit ridership from 30% to 70% by using an advanced intelligent transportation system, bus management system, and GPS. The city has become a world leader in smart mobility, establishing the World Smart Sustainable Cities Organization in 2010 to support sustainable development and export transport solutions. The metropolitan government has invested in technology to produce, store, process, and utilize big data to solve urban problems. Its intelligent transportation system uses sensors around the city to collect data so as to anticipate and prevent traffic congestion. The system also has the capabilities to warn citizens of problems and advise alternative routes in real-time. In keeping with its tradition of innovation, the city is investing in 5G infrastructure and connected vehicles. It plans to install 5G advanced driver assistance systems on busses and taxis to leverage V2X technologies, and will become the first city to use 5G innovations in the area of public transportation.

Barcelona has been a leader in the field of smart mobility, with its supercomputing center pioneering the CLASS program to develop novel software dedicated to big data analytics of real-time data from smart cities, connected cars, and autonomous vehicles. The city already employs an intelligent traffic management system based on asphalt and infrastructure sensors, but plans to utilize V2X in the future. In order to become a center for V2X technologies, Barcelona is investing in 5G infrastructure and a Living Lab, which is leading the way in engineering connected and autonomous vehicles. CLASS’s strides in advanced data analytics, combined with advances in connected vehicles and 5G infrastructure, is helping to make Barcelona a leader in urban mobility.

Download our Mobility Report, a survey of over 2,500 drivers reporting consumer attitudes on shared mobility, autonomous vehicles, and more.

If you have an app or service that uses big data to help keep smart cities moving, and are interested in adding connected vehicle data – feel free to contact us!